All the AGM has been postponed do to some scheduling conflicts with the executive. The new date will be announced shortly. Sorry for any inconvenience ... See MoreSee Less

2019 Season Manager’s Report --- Submitted by Bruce Russell
• On start-up we had the west side water line frozen and the gas pump would not work. We had to get the City to replace a broken water valve and then wait for the line to thaw. The gas pump needed a new motherboard. Greg Pickard had it fixed and inspected.
• I bought a new gas powered whipper snipper this season.
• We had the parking lot and roadways leveled up by HTI. Also all the old docks crushed up and removed giving us some room to store member trailers.
• We had some dredging done along the West side, the loading ramp, North East corner and South East corner.
• Eric MacDonald installed a cement slab and the South East Ramp.
• Some of the GFCI’s have started to die in the power posts and I have been replacing them as they stop working.
• The Musquash Fire Dept. used our ramp for Rescue Training Sept. 06/19
• Our water meter was replaced on Sept. 12th.
• Our poker Rally was a success again this year. The 50/50 was a great addition.
• Our Modem died on September 18th. The Wi-FI has not been great in the new building since it was built. I called ShadComm and got a quote. We decided to go with it and had the system delivered. We will install it ourselves in the spring.
• We spent the last week of the season working on the new building. We will have the students working out of the little building from now on.
• We repaired six of the docks as they were removed from the water.
• We winterized the Office building and all water lines.

We had most of the boats removed before the hurricane and luckily enough we had minimal damage. The West docks moved about 5 feet to the South when the cross cable pulled out of it’s dock. I pulled the west docks back in place with my truck and tied it off to one of the new building posts. Then put the ramp in place and also the South ramp was out of place.
We had two posts installed for stand-offs by the fuel dock to take pressure off of the cross cables.

Hopefully in the spring, startup should be not a problem.

I want to thank Mark MacDonald, Scott Smallwood and Laurie Gaudet for their help when Donna and I and Robert were taking the docks out. Also Ivan Woods who is continually doing something to help us out.

A few things that came up this season were:
The $25 paid for the waiting list should not be reimbursed when they pay their membership. The system is not set up for a reimbursement and it is just a real mess up for the books.
We would not like to be running with three students instead of four but I have come to the conclusion that if we have a student who just does not fit in we will start steps to fire them.

We need to buy some Blue Recycle Bins in the hopes that the members will separate the recyclables from the garbage. Messages left in the boats really didn’t make any difference.

We plan to get two stickers per membership number for next season, one for the boat and one for the trailer. Then trailers left for an extended time can be easily identified.

I don’t think we get anything from the City for letting people use the ramp and a Berth for free during the bass tournament. We should be charging everyone during this tournament.

All this being said the rest of the season was regular business. Mowing, general clean up and painting, adding or moving a few cleats etc.

Much as I hate to say it the number one priority for next season has to be more dredging. The entire center has to be done. Also Robert Holmes tried to go out one afternoon and was stuck in the mud. He had to tie up and stay at his dock. Everything else doesn’t matter if there is not enough water to float everyone in the marina. ... See MoreSee Less 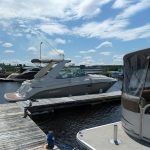 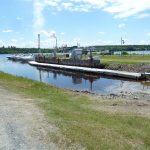